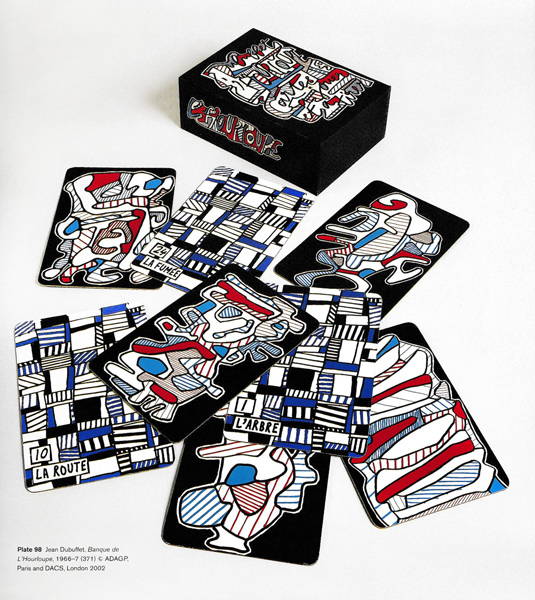 52 Playing Cards with a title card
screen printed on card in combinations of red, white, black and blue with reverse side printed in white, violet and black with number and title.

Dubuffet's L'Hourloupe series began in 1962 and would preoccupy the artist for many decades. The inspiration came from a doodle he created while on the telephone, and the fluid movement of the line combines with limited fields of colour to create movement. He believed the style evoked the manner in which objects appear in the mind.

Dubuffet designed the Banque de L’Hourloupe as a game to be ‘played on the carpet of the mind’. He summarised his playing instructions as follows:

‘May the best man win

Our words – mirages of solid
things, repositories of temporary
combinations of thought which
give us the illusion of carving
up an uncarvable world --- we
are now going to translate them
into playing cards, muddle them
up, and then rearrange them in
a different order; we will shuffle
them and deal them back on the
table of the spirit to make it
fresh and green again.’

The word Hourloupe was the title of a small book of reproductions of drawings using red and blue ballpoint pens. Dubuffet associates it to ‘hurler’ (to roar), to ‘hululer’ (to hoot), to ‘loup’ (wolf) and to ‘Riquet a la Houpe’, the title of Maupassant’s book ‘Le Horle’ inspired by mental aberration.

Banque de L’Hourloupe, printed by Kelpra Studios, London was published by Editions Alecto Ltd in a numbered edition of 350 in 1967.