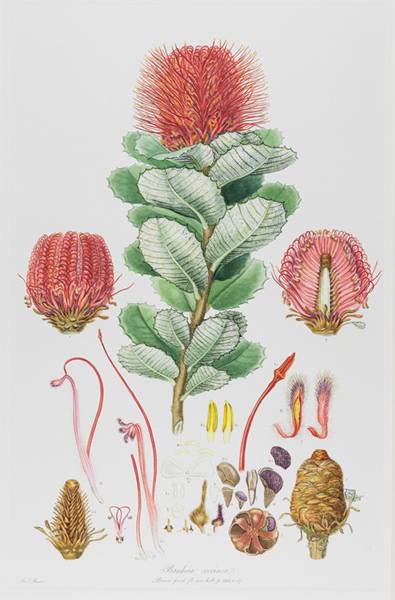 The 15 plates which make up this publication were stipple-engraved on copper by Ferdinand Bauer between 1806 and 1813 after his watercolours drawn from nature on Captain Matthew Flinders' circumnavigation of Australia in HMS Investigator 1801-1803. Both plates and watercolours are now in the collection of the British Museum (Natural History).

Ferdinand Lukas Bauer  (1760-1826) was the son of Lucas Bauer, court painter to the Prince of Luxemburg. He and his brother Franz Andreas were two of the outstanding botanical artists of the early nineteenth century.

In 1801 Bauer was selected by Sir Joseph Banks to be the natural history artist on the Flinders expedition, which was conceived, and financed, by Sir Joseph Banks who wished to determine if Australia had navigable rivers which could provide access to the interior of the country. In 1803, after the Investigator was condemned as unseaworthy, Captain Flinders decided to return to England to obtain another ship to complete the expedition. Bauer, however, continued his travels in Australia and finally returned to England in 1805 with several thousands of botanical specimens and many hundreds of sketches of plants.

In 1806 Bauer began work on a large scale publication to accompany the account of the voyage by Robert Brown, later Banks’ librarian, who had been the naturalist on the expedition. But by 1813 only 15 plates had been completed and subscriptions were hard to come by. Bauer’s elder brother Franz later explained that the perfectionist Ferdinand, who had engraved and coloured all of the plates himself, was unable to find competent engravers and colourists to complete it.

The project was abandoned after fewer than 50, and probably no more than 35 sets, had been sold.

The engravings in the Alecto portfolio, printed and published in 1989 in association with the Natural History Museum in an edition limited to 35 copies, are the first impressions to be taken from the original plates since 1813. This portfolio is number XXXIV/XXXV.